Some 107 Latin American and international law firms have helped companies in the region raise nearly US$90 billion through 366 debt capital markets deals between January and June of this year, according to Latin Lawyer’s data.

While it did not land the most deals, Pinheiro Neto’s combined deal value of US$14 billion was the highest among all Latin American firms. Stocche Forbes followed with total transactions worth some US$10 billion.

In Spanish-speaking Latin America, companies raised US$40.6 billion across 131 transactions over the six-month period. Argentina’s Marval, O’Farrell & Mairal was the busiest firm outside of Brazil, driving through 16 issuances. Barros & Errázuriz Abogadosof Chile came next with 13 transactions. Miranda & Amado Abogados in Peru and Tanoira Cassagne Abogados in Argentina also did well. Each reported 11 transactions.

Two Chilean outfits racked up the highest combined deal values. Morales & Besa was involved in issuances worth US$6 billion in total, while Philippi Prietocarrizosa Ferrero DU & Uría (Chile) was not far behind with US$5.9 billion. Outside of Chile, Ritch, Mueller, Heather y Nicolau, SC of Mexico made a good showing. Despite only working on two deals, its combined transactional value was US$4.8 billion.

Among international firms, Cleary Gottlieb Steen & Hamilton LLP and Shearman & Sterling LLP worked on the most deals. Cleary landed a place on 18 transactions that raised US$27 billion (the highest combined value of any firm advising clients in the region). Shearman came next, steering 12 deals worth US$15.4 billion in total.

In the corporate world, Engie and Canadian pension fund manager CDPQ-owned Aliança Transportadora de Gás made the largest offering, raising US$3.7 billion for the  purchase of Brazil’s largest gas pipeline company from Petrobras. This was one of the largest debenture issuances ever made under the country’s modern securities regulations. In size, this was closely followed by a US$3 billion debt tap by Petrobras in April.

The sovereigns were also busy. Chile became the first Latin America country to issuegreen bonds in a transaction worth US$2.4 billion. This followed a separate US$1.9 billion sovereign issuance in May, which was made in local currency. Elsewhere in the region, Mexico tapped the debt markets for US$4.8 billion in two different issuances; Peru offered sovereign bonds worth a combined US$2.5 billion and Uruguay raised US$1.25 billion in a single issuance.

Dominican Republic, Guatemala and Panama were also active in the sovereign debt markets. Combined, they raised a total US$7.15 billion.

Among Brazilian issuers, the power sector was the busiest source of debt taps over the six-month period, with 50 issuances. In Spanish-speaking Latin America, banking and financial services accounted for the most offerings: 57 in total.

Our report is based on deals of any value submitted to Latin Lawyer that were completed between 1 January and 30 June 2019. Firms linked to reported deals were invited to submit other transactions which occurred during this period. We include any transactions conducted under debt capital markets rules set by a relevant securities regulator, including securities, notes, debentures, bonds, debt tender offers. The tables do not include equity transactions, such as IPOs, share placements, Fibras, CKD or tender offers.

The January-February debt capital markets reports, which were published earlier this year, have not been updated to include deals that were submitted after publication, but these transactions have been factored into the league table results below. 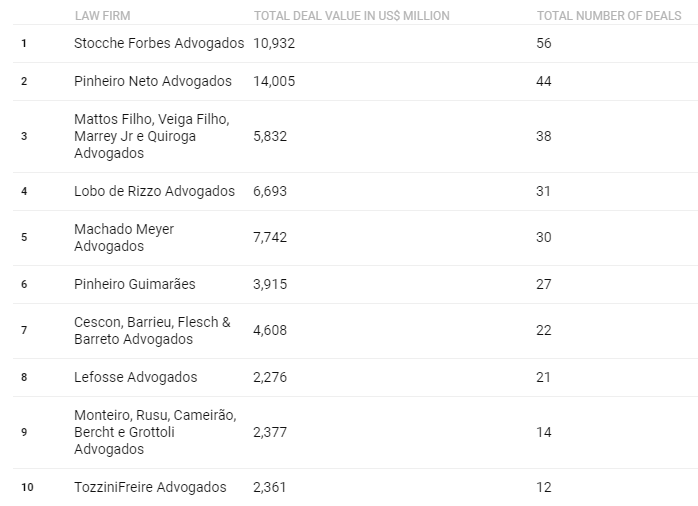