Brazil’s Lobo de Rizzo Advogados has elected a new managing partner and promoted three associates to partner in the corporate and M&A and tax departments to coincide with the firm’s 10-year anniversary and launch of a new name and logo. 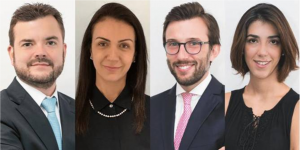 Corporate and M&A partner Rodrigo Delboni Teixeira, 42, became Lobo de Rizzo’s fourth managing partner on Tuesday and takes over from fellow corporate lawyer Rodrigo Guerra, who was the firm’s first non-name managing partner. The elevation also coincided with a rebranding that included a small tweak to the firm’s name and launch of a new logo. “I pass on the baton with great tranquillity, as Rodrigo is a long-time friend for whom I have great admiration and respect,” says Guerra. “I would like to thank everyone for their support in these last three years and can say that these changes are vital for our culture to continually be renewed and for new ideas to be introduced.”

Teixeira will hold the position for three years and was selected by the partnership partly due to his experience working as an associate at leading and local and international firms Linklaters, Pinheiro Neto Advogados and KPMG. He joined Lobo de Rizzo as a partner when the firm was launched in 2007. “It is a great pleasure to be able to manage a firm that, together with my partners, I helped to create and was able to participate in during its first 10 years,” he says. “Our reference during this trajectory was based on international firms that are managed as companies.”

The election was also timed to coincide with a triple promotion to the partnership. Ana Paula Miguel, 39, and Rodrigo Roso, 34, both became partners in the corporate and M&A practice and Maria Carolina Bachur, 33, joined the top ranks in the tax department. The new additions increase Lobo de Rizzo’s partnership to 21.

The newly minted partners continue an aggressive expansion strategy that has seen the firm boost the partnership in its transactional and non-transactional practice areas (and fill positions left vacant by several high-profile departures) through scores of lateral hires and promotions over the last three years. During a frenetic 2016, the firm hired banking and capital markets partner Milton Pinatti from Tauil & Chequer Advogados in association with Mayer Brown shortly before banking and finance co-head Felipe Eluf Creazzo left to join K&L Gates; strengthened its corporate and infrastructure departments in Rio by poaching Daniella Tavares from Machado Meyer Advogados; replenished its labour department with the addition of consultant Boriska Ferreira Rocha after the departure of former head Andrea Massei Rossi to Machado Meyer; and addedMariana Miranda Lima from Lefosse Advogados in its tax department. A year earlier, Lobo de Rizzo also incorporated a two-lawyer energy boutique that brought on boardMarilda Rosado de Sá Ribeiro as counsel. Since 2014, the firm has promoted eight associates to partner in the corporate, tax and litigation practices.

Over the past 10 years, Lobo de Rizzo Advogados firm has substantially expanded its service offering and headcount, and now ranks as a mid-sized firm with close to 100 lawyers on its payroll. Among the areas to experience the greatest increased growth is the firm’s tax department, which was launched as a stand-alone practice area following the hire of Alexandre Siciliano Borges from Lacaz Martins, Pereira Neto, Gurevich & Schoueri Advogados in 2013, and now counts five partners compared to none when the firm was established.

Lobo de Rizzo was established by a group of 27 lawyers from Lefosse Advogados a decade ago. The split deprived Lefosse, which at the time had an exclusivity agreement with Linklaters, of around one-third of its corporate practice, a large share of its litigation practice and the whole of its antitrust practice. Name partners José Orlando Lobo and Valdo de Rizzo led the defection and were Lobo & de Rizzo’s first two managing partners, before handing over the reins to Guerra in 2014.