New prosecution of patent applications: what changes after the newly launched Project to Fight Patent Examination Backlog from the Brazilian PTO?

The Brazilian PTO (INPI) has already published the first Official Actions linked to Resolutions Nos. 240/2019 and 241/2019, which officially open the Project to Fight Patent Examination Backlog and, by the simplified content, aim to solve, within the next 2 years, 80% of the queue of pending patent applications.

In practice, the new Official Actions divide patent applications filed in Brazil into two groups: (i) those that have already had prior-art search performed in patent offices from other countries; and (ii) those for which no prior-art search has been performed, plus the applications in expedited examination and/or with third-party observations.

In the first case, the INPI publishes an Official Action with a simplified report, which is limited to pointing out the documents already found in foreign searches. In the second case, the INPI performs the prior-art search, but also publishes the Official Action with a simplified report, again only pointing out the documents found.

In both cases, the Applicant has 90 days to present a response and in this regard we draw attention to two special points. The first one is that the lack of response leads to the definitive shelving of the patent application, thus closing the application before the Brazilian PTO permanently. The second one is that the submission of an unsatisfactory response, that is, without presenting relevant arguments and/or without amendments to the claims of the patent application, may lead to its direct rejection. In this case, it is possible to file an appeal.

We have prepared the flowchart below to help understand the new prosecution.

In this sense, and in view of recent opinions from the INPI, our recommendation is: for the cases in which there is interest in an expedited grant, adapt the set of claims to the most limited one among those granted in other countries, preferably accompanied by a satisfactory response in view of the cited prior-art documents. For the cases in which amending the set of claims is not necessary, we recommend the presentation of a robust and highly technical argumentation in view of the cited prior-art documents, preventing the INPI from considering the response unsatisfactory and publishing a rejection.

We point out that limitations, adaptations and/or arguments in view of the particularities of the Brazilian IP Law may still be necessary, and that, for cases in which there is interest in presenting third-party observations, which is possible at any time, it is important to consider the new speed of examination.

These are impacting changes in the prosecution of patent applications in Brazil, and an opportunity to achieve increasingly expedited granting, provided that intelligent strategies are developed to present the responses before the INPI. The cooperation with specialized attorneys in Brazil is increasingly important. 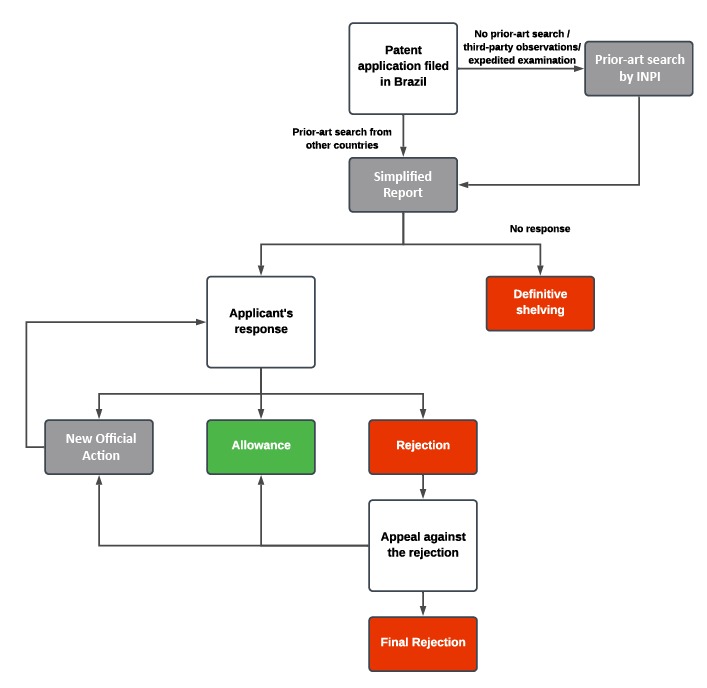